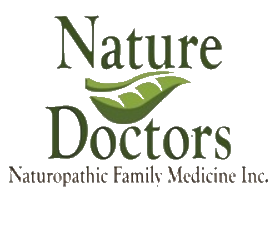 Testing Available at The Nature Doctors

A variety of testing options are available at The Nature Doctors in Winnipeg, Manitoba. Below is a list of some of the Tests that we offer. 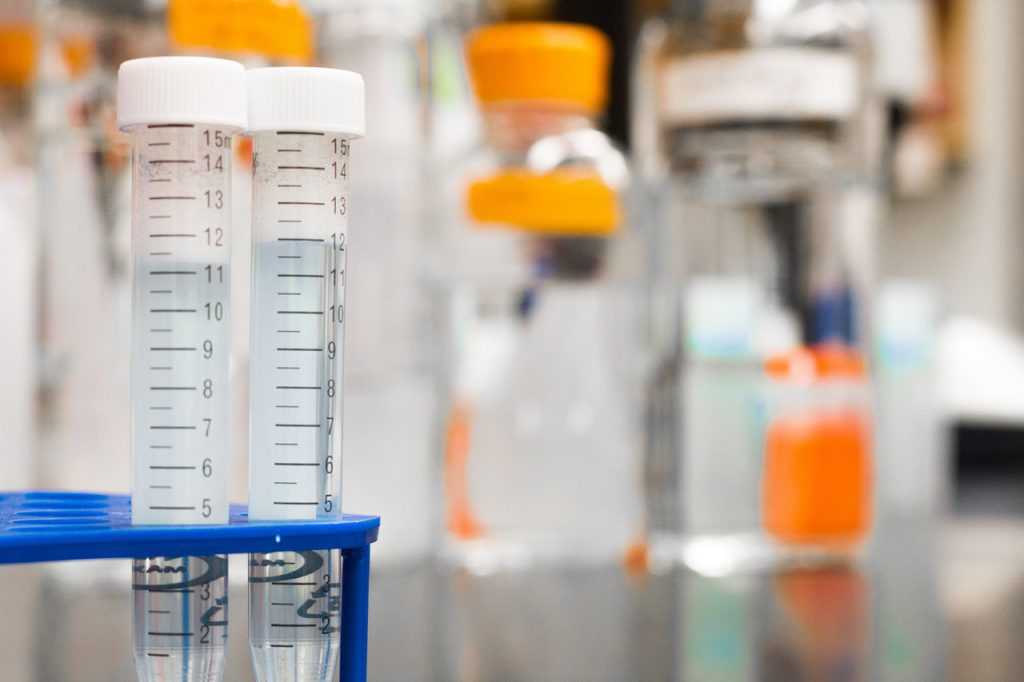 Testings are listed in alphabetical order: 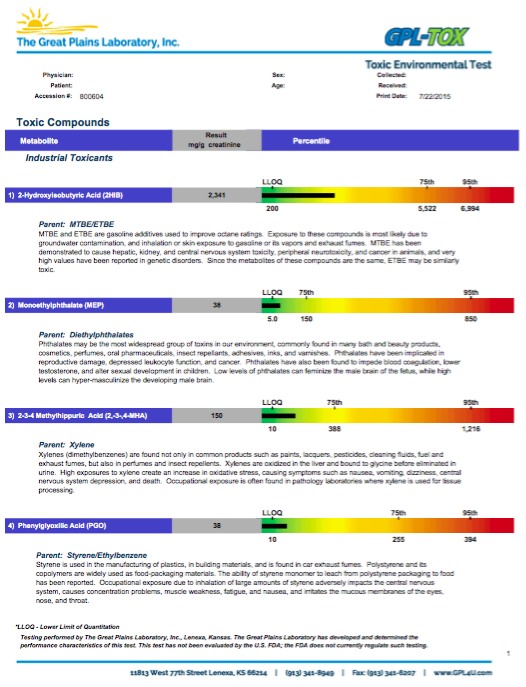 Pesticides, herbicides, fuel additives, fertilizers, plasticizers – these are all groups of chemicals that we are exposed to on a daily basis.  These also happen to be things that conventional labs do NOT test for.   A simple first morning urine test will determine your levels.

Symptoms may include but are not limited to:

Glyphosate or Round Up is thought to dissipate in the environment quite quickly once applied.  However, some people seem to react to foods that have been treated with the chemical.  Patients will often have concerns such as headaches/ Migraines, IBS, IBD, brain fog, skin rashes or break outs.

Correlations are not causations, yet they raise concern over the use of a chemical to which all life on earth appears to be exposed.” Source: https://www.greatplainslaboratory.com/articles-1/2017/1/23/the-importance-of-testing-for-glyphosate-the-worlds-most-widely-used-herbicide?rq=glyphosate 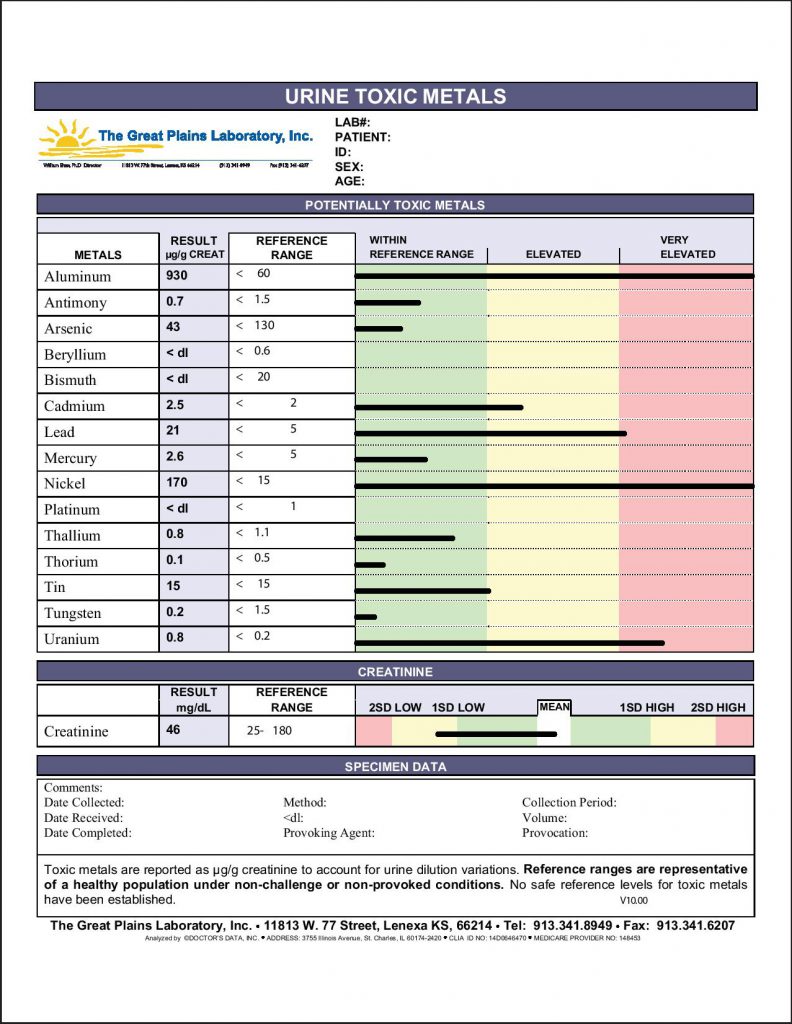 Lead, mercury, bismuth, nickel, cadmium just to name a few…many people are exposed to these metals through drinking water, cosmetics, work places, cigarettes and second hand smoke. Metals can accumulate in your body as a young person and finally cause disease later in life as your body is less able to compensate for the burden.  This is a simple urine test.

Conditions where heavy metals are worth testing include but are not limited to:
– Arthrosclerosis (hardening of the arteries)
– Dementia
– Fatigue Syndromes (Fibro and Chronic Fatigue )
– Thyroid conditions (Hypothyroidism, Hyperthyroidism – Graves / Hashimoto’s)
– Multiple Chemical Sensitivities
– Metal sensitivities (react to metals in jewelry)

The benefit of this test is it will also determine your healthy minerals levels to see if you are deficient in any. 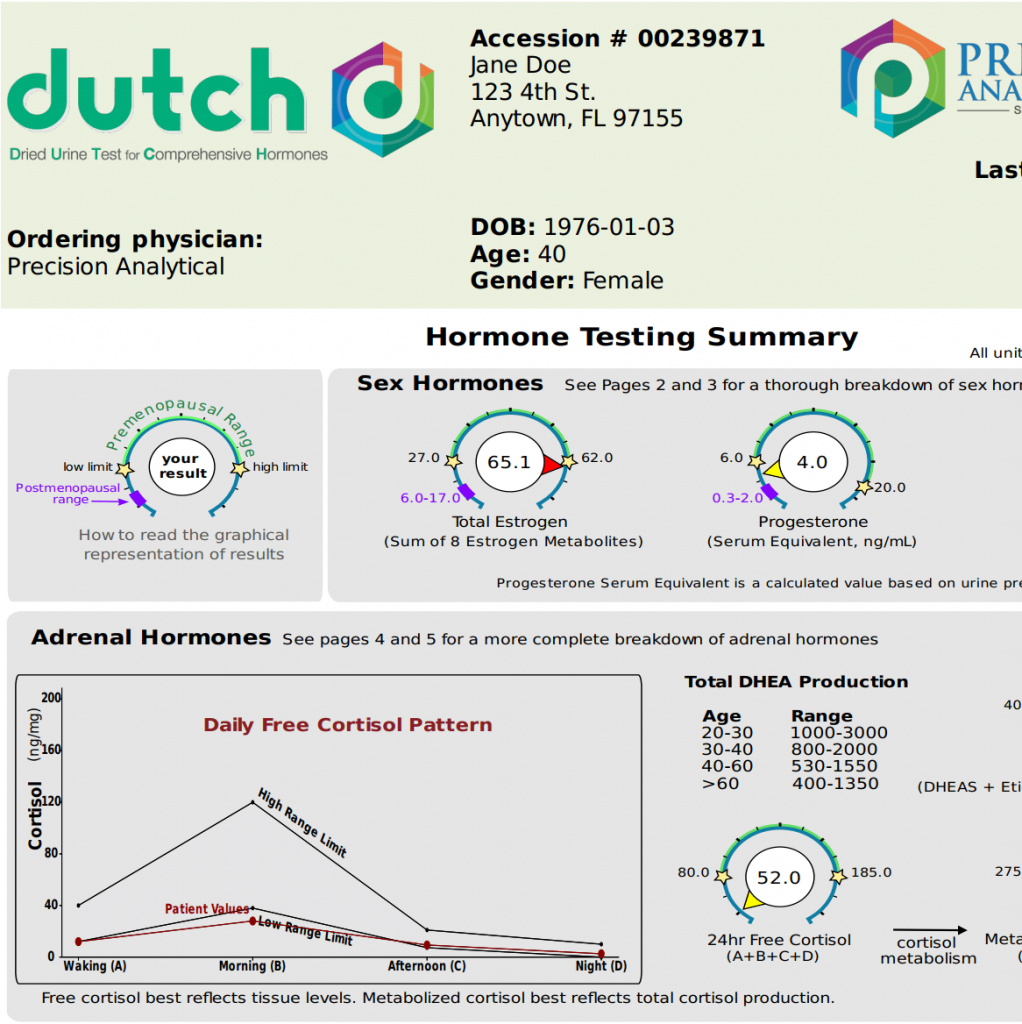 Why test a couple hormones on one day when you know that hormones change throughout the month?

Conventional hormone testing can be inaccurate due to improper timing of the test, testing bound hormone vs. free hormone and by not testing thoroughly enough to compare the relative amounts of all the hormones that interact with each other. 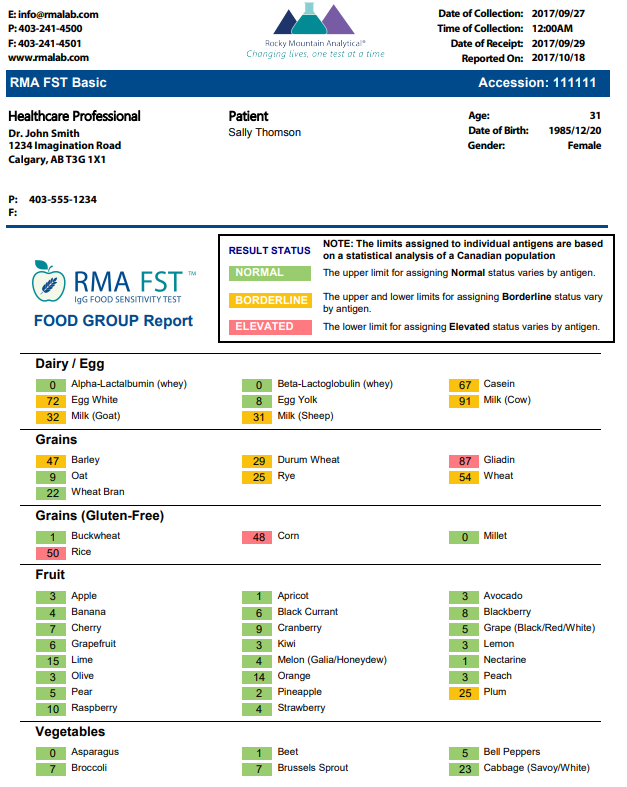 What is a food Sensitivity?  It is not a true allergy in the sense of hives and anaphylaxis but it is an inflammatory and cumulative reaction.  This means that over time you can develop inflammation with constant exposure to a particular food item.  Usually this is initiated by some sort of trauma to the gut, like antibiotic use, alcohol binging, food poisoning or periods of acute stress.
There are a few labs we use and sometimes the test can be covered by health insurance benefits.

Testing for Lyme disease in Canada is not as accurate as one would like and often these tests just test for 1-3 strains known to cause the disease.  There are over 20 strains identified that have been shown to cause Lyme symptoms.

At The Nature Doctors, we use labs from all over the world that specialize in the latest testing procedures.  While not inexpensive, it is important to get the right testing to rule out the disease.  Costs for testing ranges from $700 to $2500 depending on how many organisms you are tested for.

While Lyme is the primary culprit, there are many Co-Infections that should be tested for if the symptoms match up, including: 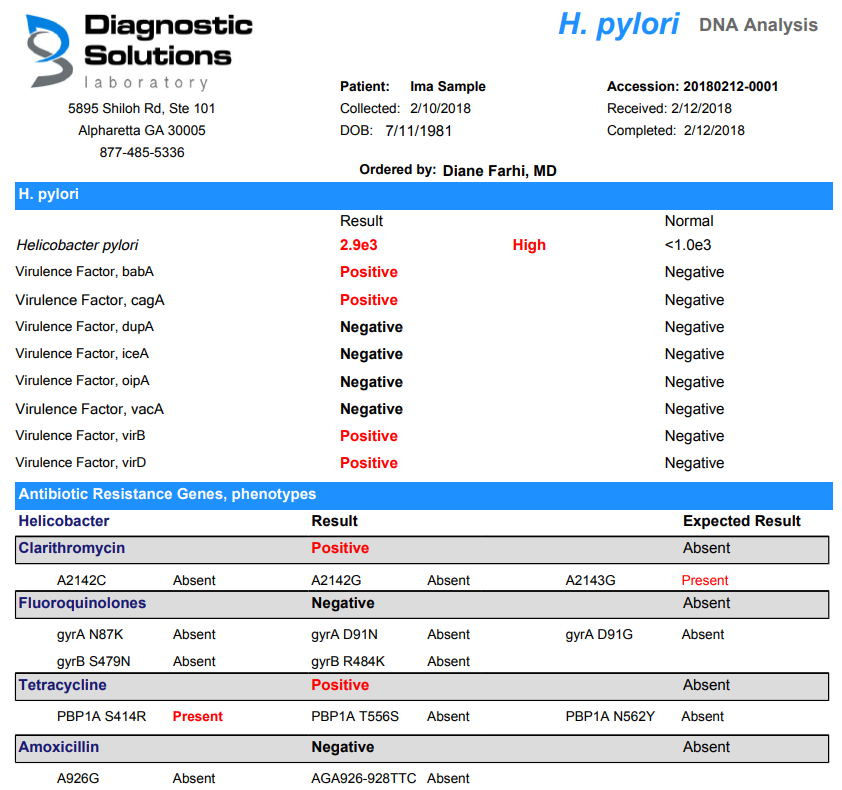 Video Instructions on how to complete the GI Map Test Kit >

Having the wrong bacteria or parasites is just as bad as having too much or too little of your healthy bacteria.  How many people suffer with poor bowel function just to be told by their doctor to eat less junk food?  Or have been told they do not have parasites based on a stool test?

Testing options have improved so much over the last few years that we are now able to offer the first stool test that genetically analyzes the fecal matter to determine what is growing in it, how you are digesting your food, are there inflammatory markers and where are they coming from.

Here are a few of the labs we use: 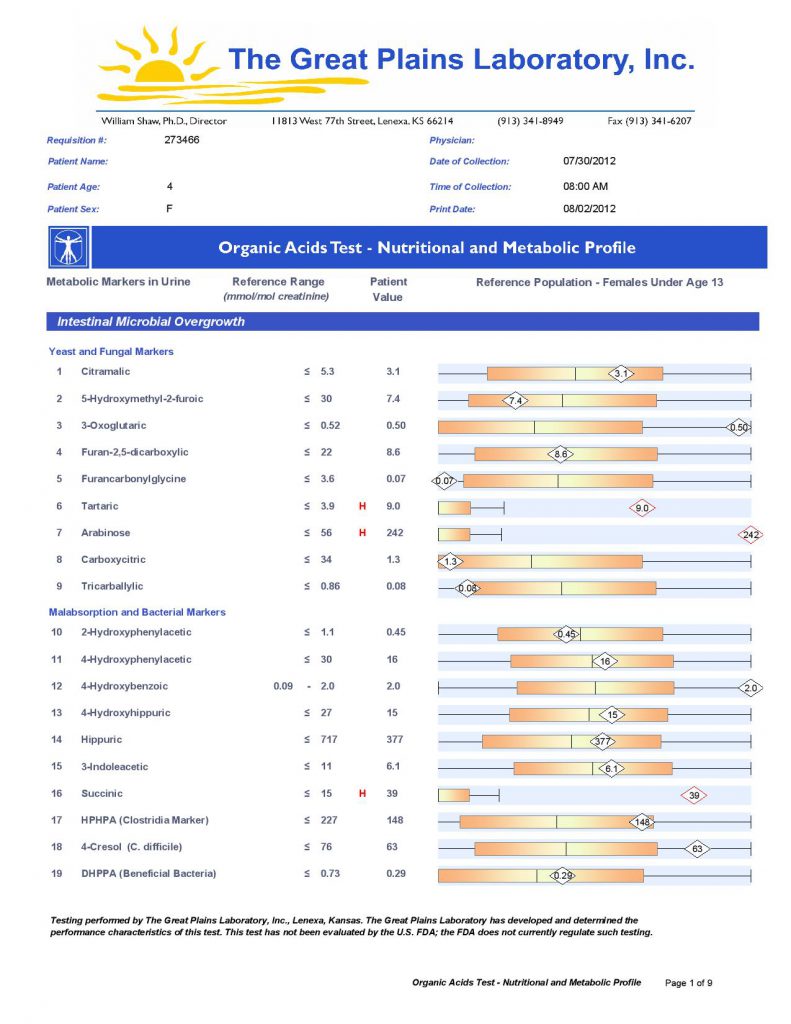 This test helps to determine what is growing in your bowel, how you are absorbing nutrients and whether you have any metabolic pathways that may be out of balance. Symptoms of imbalances may include:

This simple urine test is non-invasive and easy to collect on young children. 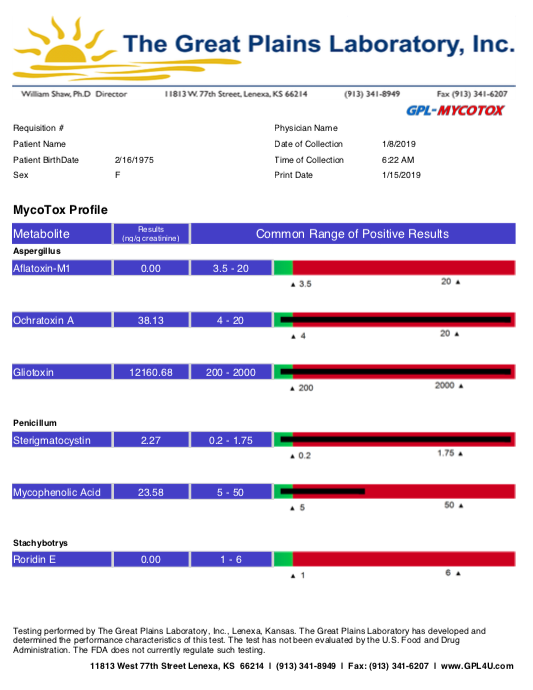 Mycotoxins are toxins released by fungi in our environment.  Some molds grow in carpets, water damaged buildings or even on old flour in your baking cupboard.  Symptoms of mycotoxins often mimic Fibromyalgia, Dementia, Alzheimers, Lyme disease amongst others but usually always having fatigue and brain symptoms.

A simple urine test can help to determine if this is the cause of your concerns.  Once identified, we can put together a protocol to help your body remove or detox the mycotoxins.  This is a very difficult thing to do and requires patience and diligence.

Video Instructions On How to Take the SIBO Test >

Too much of a good thing!  Do you bloat all the time?  Regardless of what you eat?  Do you wake up bloated?  Constipated? Brain fog and fatigue?

These are all symptoms of SIBO.

Good news!  There is a simple and easy breath test you can do to determine if this is the cause of your discomfort.

To view a sample of a Thyroid Testing Results Report, click here.

Typically patients will have their TSH tested by their MD and if this comes back normal – then you are fine.  BUT, you know you are not fine!  When you come to see a Naturopathic Doctor with symptoms of fatigue, hair loss, thinning skin, low energy, brain fog and decrease sex drive – we will do a thorough workup with may include thyroid testing.
These parameters should include:
– TSH
– free T3
– free T4
– Thyroid antibodies
– Reverse T3
– Iodine
– Selenium
– Possibly Heavy Metal Testing or viral/ bacterial testing such as EBV or Chlamydia pneumonia

Only once you have all the information can you piece together the cause of your health problems. 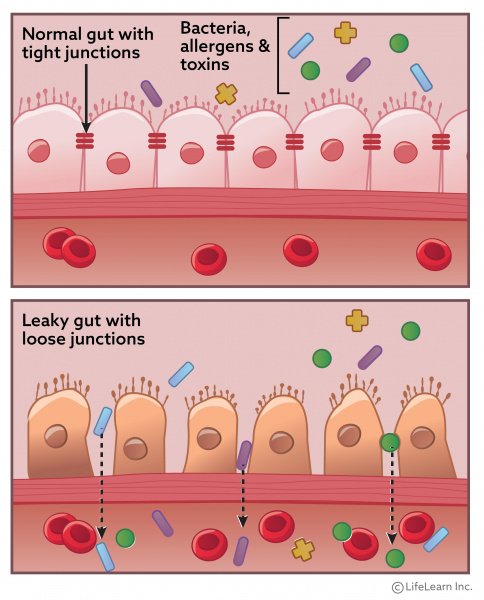 Zonulin is a chemical that is released when the gut becomes inflamed and porous.  Think of your bowel like a long tube made of square or rectangular blocks.  These blocks fit tight so not to allow food particles outside of the bowel.   What happens when you sprain your ankle?  It swells.  The same thing happens with your gut except the square blocks now swell and more closely resemble beach balls.  Now try to build an impermeable wall with beach balls!  You can’t.  There are too many gaps in a wall made of spheres.  This is where the concept of leaky gut comes from.

As small particles of food go through the gaps, the immune system comes into contact with them and mounts a reaction.  This is how food sensitivities are born.    By testing for Zonulin and food sensitivities, then removing the offending foods – your body can heal and the gaps can become tight again.  Quite often, the patient does not need to remove the food forever, just until  the gut heals.

Are you looking for information on IV Therapies that we offer?
Check out IV Therapies available at The Nature Doctors >

Are you looking for information on Treatments that we offer?
Check out Treatments available at The Nature Doctors >

Have questions about our testing services?

Naturopathic services are covered by most benefit plans. 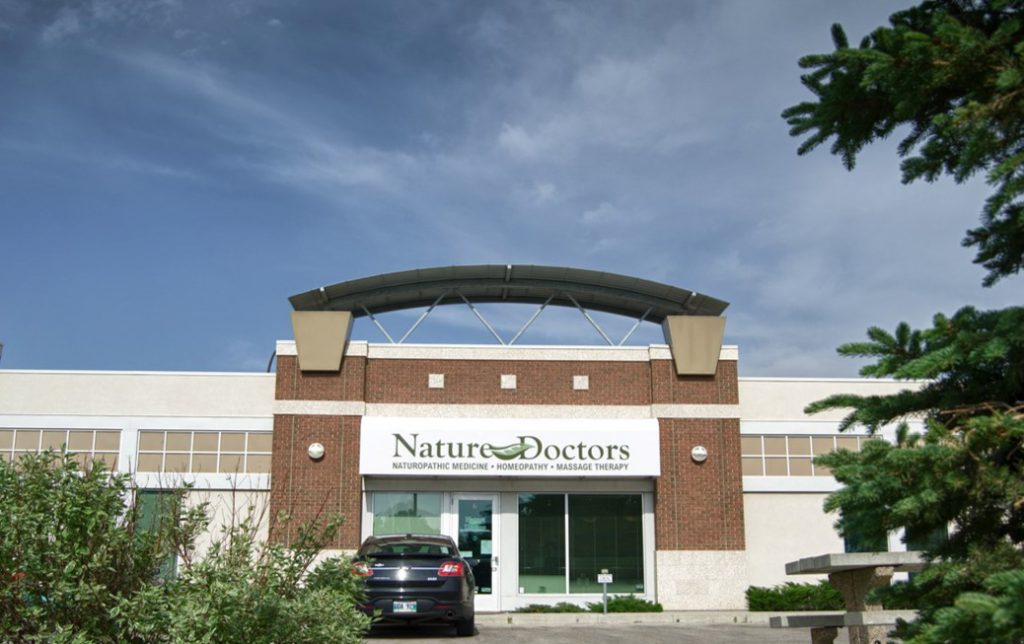 We acknowledge that The Nature Doctors is located on ancestral lands, Treaty 1 territory, the traditional territory of the Anishinaabeg, Cree, Oji-Cree, Dakota, and Dene Peoples, and on the homeland of the Métis Nation.